Do my bare shoulders make you uncomfortable? Does seeing my belly button lead to distracting thoughts? When you ask questions such as these, they seem silly, but it’s a serious issue. In the past month and a half, the administration has cracked down on the dress code and there’s been quite the discussion on it.

Let me start off on a simple note; it is extremely embarrassing to be dress coded. To have a teacher, or administrator tell you to change whatever you’re wearing that day because it is  “inappropriate” or “distracting” in front of your peers is humiliating. I’m sure multiple girls in this building know this feeling. On the other hand, they could be feeling quite angry, for a very good reason. By calling teenage girls out on their attire, you are telling them that what they wear to school is more important than their education.

As I’m sure many of you have noticed, crop tops and off-the-shoulder shirts are in style. In the handbook, it mentions that clothes need to be a “community standard”. You would think that if every store is selling these shirts, and a majority of girls are wearing them on a day-to-day basis, they would be considered a community standard.

However, if you’re a guy, apparently you can pick up whatever’s lying on your bedroom floor, throw that on, and you’re good to go. The difference between the guy’s dress code and the girl’s dress code, as well the enforcement of the dress code is astounding. Tell me why a guy can run around at a practice, shirtless and not be punished for it, but girls are not allowed to tuck their shirts into their bras or go the same route as the guys and be shirtless at practice. That’s a quite lovely double standard right there. If a female’s shoulders showing is distracting, why isn’t a a male’s bare torso, shoulders, stomach, nipples, and all not distracting?

In conclusion, after all I’ve said; are my shoulders REALLY the “issue”? 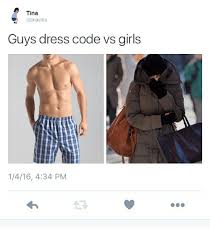 One thought on “The Dress Code”

“Always try to be nice, but never fail to be kind.”